It was officially announced today that the Google Glass Explorer program is shutting down as Google moves the project out of its X-labs phase and into, reportedly, a consumer division. News reports indicate it’s moving into the same division as the Nest thermostat group.

Seeing Glass move on from ultra beta to something more consumer focused is exciting, albeit a little disconcerting since it seems the current hardware that Explorers are wearing won’t be receiving any new software updates. Plus, it has been reported that Google is moving to a different chip and, possibly, a sleeker design.

I don’t mind that Google is shifting gears away from the Glass Explorer program. I do think they could have handled the public relations on the announcement better though. They could have, for example, sent the announcement directly to Explorers instead of letting many of us read about it in the news. (I did receive an email from Google Glass, but it arrived several hours after the news broke publicly.) I actually first caught wind of the report when a writer contacted me for my thoughts on the Explorer program shutting down. I and many other Explorers shared our thoughts with him and you can read that report here.

From day one, the public relations, marketing and government lobbying aspects of the Glass program have been questionable at best. I’m sure Google learned a ton about the technology behind Glass and have many ideas on how to improve it. I can only hope that they have learned as much about the humanity behind Glass, as well.

One of the questions I was asked for the report linked above was what I thought Google needed to do next to get the program into full consumer production mode. What I said was that they have to do three things to make this successful beyond a beta product. Those three things include a lower price, a less-intrusive design and a smaller battery that provides more time on a single charge. That’s a lot to ask for from any new technology so it wouldn’t surprise me if this takes a while to develop. It seems to me that they probably captured all they could from the Explorer program and are ready to move into the next phase, which is a good sign in many ways. Wearables are going to become commonplace someday, and we Explorers will look back and laugh at how we chose to walk around with the brick-style cell phones of wearable tech.

The Explorer Edition of Glass provided me with some amazing opportunities in the 13 months I have owned it. I have met people from many places and walks of life, some online and some in real life. I have been featured in news articles, resurrected my blog, and been drawn out of my introverted shell at public gatherings because of Glass.

I lost track a long time ago of the number of times people have stopped me to ask about Glass and the number of people who got excited when I explained what it can do. And seeing someone’s reaction when they try on Glass and experience firsthand what it’s capable of is always a treat.

Yes, it’s still clunky and it screams “nerd,” but it is the first step to the future of wearables and those first steps are always fraught with complications. It is unfortunate that negative media attention became a sure thing to raise click rates. There has been a lot of misinformation and downright hyperbole extolled by the media that should not have happened.

All-in-all though, I’d say being an Explorer has been great and I hope the device lasts me a good long while yet. It would be really difficult to get used to not having easy texting, turn-by-turn navigation and hands-free photos and videos available the way they are with Glass.

So, sorry, Steve Jobs, but as the Google Glass Explorer program comes to a close, I’m reminded of one Apple’s most inspiring quotes:

Here’s to the crazy ones. The misfits. The rebels. The troublemakers. The round pegs in the square holes. The ones who see things differently.

And, I would add, the ones who don’t need a little “i” in front of a device to think it might stand a chance at changing the world.

It has been a fun ride being one of those crazy explorers. But eventually every explorer becomes a settler. Well, at least until the next great gadget comes along that we simply must try no matter how much of a crazy misfit it makes us appear to be. 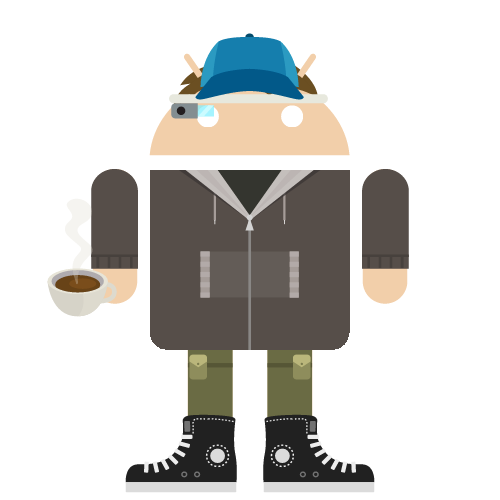