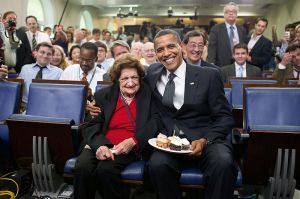 President Obama gave Helen Thomas cupcakes for her 89th birthday in 2009. Earlier this month, he called her comments on Israel and Palestine "offensive" and "out of line."

It used to be that a person’s legacy stood for something. But in today’s era of instant communication, instant sharing and instant judging, the power of a solid reputation or a history of greatness means very little.

Thomas has received numerous awards throughout her career and more than 30 honorary degrees. In 1976, Thomas was named one of the World Almanac’s 25 Most Influential Women in America. Thomas received an Al Neuharth Award for Excellence in the Media from the Freedom Forum in 1991. The White House Correspondent’s Association honored her in 1998 by establishing the Helen Thomas Lifetime Achievement Award. In 2000, her alma mater, Wayne State University, established an award for journalists in her honor, the Helen Thomas Spirit of Diversity award. In 2007, Thomas received a Foremother Award from the National Research Center for Women & Families.

There are few who would argue against the concept that Helen Thomas paved the way for women to be respected as professional journalists. She is an institution among all journalists, male and female, when you consider something else Wikipedia points out: “Thomas was the only member of the White House Press Corps to have her own seat in the White House Briefing Room. All other seats are assigned to media outlets.”

I had a brief discussion on a colleague’s Facebook page about Thomas the other day, which you can see here:

It is interesting that a bastion of old-school journalism has been taken down by modern online “reporting” of a citizen with a Flip-style video. More important than how it happened, however, is why it happened. Again, without debating the merits of what Thomas said about Israel and Palestine, did the fact that she shared a fiery opinion negate everything she has done for journalism and women for more than half a century?

Have we become that judgmental and unforgiving? I’d like to hear your thoughts and all opinions are welcome here. I may not agree with your comment, but I promise not to judge you for it!