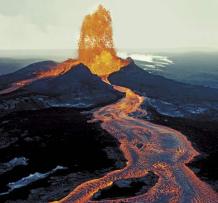 We take so much technology for granted these days, that I really feel like I need to repeat that last part. “…with their peers around the world.” And it wasn’t just a written connection, or a voice connection — but a video connection. Students from around the world had the opportunity to watch as Brendan Brennan took his class to visit a volcano in Hawaii.

Under the moniker of “Project Open Glassroom,” Brendan found a way to connect students with his class by utilizing computers, portable WiFi and Google Glass in a way that allowed the classrooms to interact, ask questions and see what Brendan and others were seeing, live as it happened.

We have added 3 (count ’em) Google Glass feeds via LiveStream for the field trip in addition to the Hangout On Air. One for a student, one for a teacher and one for a volcanologist.

I watched it off and on, streaming it to one of my computer screens while taking care of work on others. While it would have been fun to focus entirely on what Brendan was doing, this was a great type of broadcast for multitasking in the middle of the afternoon.

I’m sure it was a great experience for all the kids involved, even if they didn’t get to see the volcano in a live feed. Obviously, descending toward a volcano in Hawaii with no cellular towers nearby is not conducive to streaming video and the feed was lost before they got to their destination. But it was a valiant effort that really showcased the power of learning that Google is offering classrooms through Glass and Hangouts on Air. (Unfortunately, Google announced last night that the next Glass software update, due out this week, will be removing video calls as a native app. We can still opt to use Livestream, but I hope video calls return soon after Google takes on its challenge to “make them better.” Otherwise, we’ll lose opportunities like this one used by the Houston Zoo and a hospital.)

Besides showcasing the power of technology, this experimental trip to a volcano also was evidence of the power that teachers have to show students how much more there is to becoming educated than what they can see within their schoolroom walls or read about in textbooks.

You can see pictures that some of the classrooms posted at the Google Plus Event page.

Kudos to Brendan and everyone involved in yesterday’s excursion. It was a valiant effort.