When people have complained about print newspapers dwindling and everything moving online, I’ve written  about how news gathering matters much more than the form in which it’s delivered. I’ve also had my share of critical reviews of MLive, its recent merger with Booth Newspapers, and the entire concept of focusing too much on delivery of the news and not the gathering of it. I had a first-hand, behind the scenes look at the new MLive Media Group recently, though, and I have to admit that maybe I have been too quick to judge.

I still get frustrated with MLive’s website being too cluttered — some days it seems a testament to society’s insatiable appetite for information vs. knowledge, not to mention the wisdom needed to fully appreciate both. But if you spend some time with Dan Gaydou, publisher of the Grand Rapids Press and now president of  MLive Media Group, you can start to see the positive side of what that organization is trying to do for the journalism industry and its consumers.

During my tour of the new Grand Rapids MLive hub, which is being prepared for opening in February, I have to admit I found myself nodding in agreement with what Gaydou was preaching, and finding myself more excited about the future potential of journalism than I have been in years. Gaydou is a traditional newspaper guy but he has found a way to embrace the next generation of journalism. He still understands that what matters is community — how every story can be a local story because news readers can and should care about what’s happening across town, across the state and across the country because of its potential impact on their town. But he also sees the increasing use of technology in journalism as a method by which to gather and deliver that news faster and better, and not a collection of flashy toys that look impressive but don’t deliver on their full potential.

It’s not appropriate for me to share too much inside information with folks. After all, that is MLive’s news and I’ll let them be the first to share it. But I can tell you this: MLive is outfitting its reporters with some of the latest technology and providing workspaces that are tapping into technological resources many of us will be envious of regardless of our current industry or position. 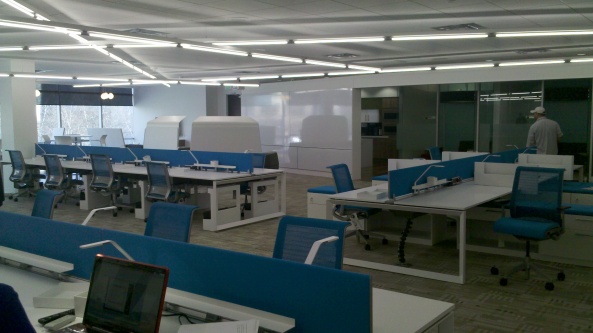 MLive’s “hub” is under construction in Grand Rapids.

As a news consumer, I’m excited to see the technology and flexibility of bloggers married to the standards and ethics of professional journalists. As newspapers have struggled to survive, they have left a void filled by amateurs who, even when well-intentioned, often fall short in their ability to deliver quality news. Bloggers aren’t journalists, and not just because of a judge’s list on page nine of this 13-page ruling.

But journalists have suffered recently as their employers have scaled back, struggled to survive and refused to give them the resources they need to do their jobs well. I think that could change with the MLive news hubs. Journalists will be given the equipment and resources needed to be out in their communities gathering news, writing good stories and delivering them at an amazing pace. Hopefully, MLive Media Group will see that there is still a place in this world for well-researched, longer stories that deliver more than knowledge, they also help readers find wisdom. I heard a great line about the difference lately. “Knowledge is knowing tomatoes are a fruit, while wisdom is knowing not to put them in a fruit salad.”

The MLive Media Group is growing rapidly in several markets and has its eyes set on more. They are challenging the old way of thinking in journalism. Gaydou preaches that they are trying to find a way to deliver the best journalism they can in a way that allows them to connect with old and new audiences alike. If they truly practice what they preach at MLive Media Group, then we’re about to see something special happen.

2 comments on “MLive may just breathe life back into journalism”