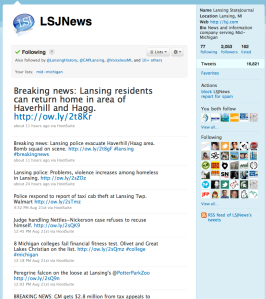 I recently wrote a blog post and hosted a poll about the Lansing State Journal being on Twitter and how it should handle that account. The issue is that the State Journal uses an auto feeder to populate its Twitter stream with headlines from its web site. Unfortunately, this leads to the potential of outdated news ending up on its Twitter account, a place where breaking news generally becomes old within minutes if not seconds.

The folks running the State Journal’s Twitter account have gotten better over time as they’ve become more comfortable with the service. They are engaging with readers who point out errors or have suggestions. And this past week they even posted a Follow Friday shout-out to my wife and me, who are frequently tagged as the LSJ online watchdogs. The problem is that the staffing for the Twitter account is apparently not considered a priority in the State Journal newsroom. Although, like most newspapers today, I’m not sure if news in general is considered a priority these days.

When I had a discussion on Twitter with the State Journal staff about the problem with their feed, they raised the dilemma of using the Twitter stream to post news only when staff is available, noting that tweets may be few and far between if they go that route. When I asked people to weigh in on the concept, allowing them to vote for full automation, tweeting only when staff is available or a combination, they, not surprisingly, voted for the combo. Certainly it wasn’t a scientific poll and the number of respondents wasn’t huge, but nearly 83 percent of those who voted opted for “Usually automate but engage during breaking news.”

What was more interesting than the poll numbers, however, were  the comments from my readers. Some commented on live vs. automated posts:

I don’t mind the automated tweets for promoting their published articles. For example, the business news feeds are great. The breaking news tweets should be in the moment. ~ Lisa

As a whole, news organizations have a huge responsibility. As a society we expect them to cover everything that interests us, do it accurately and without bias, and then make sure we know they have covered it. At the same time newspaper circulation has continued to plummet making it necessary for them to cut staff. I don’t think it’s realistic under these circumstances to have a live person tweeting at all times. I do agree, however, that every attempt should be made to disseminate accurate information at all times. ~ Anne Craft

Others suggested another approach entirely, using Twitter as a back channel to the newsroom:

Twitter is about two-way communication, sharing and networking. While I appreciate headline/breaking news being tweeted, I’d much prefer more interaction with followers, insights or background stories that don’t make the articles, etc. I know that is hard with limited budgets, but making some effort will show they care. Maybe the folks in charge of the budget will see how beneficial it is to the community and toss a few more bucks in that direction to keep it going!  ~ Kate

While still others admitted that they turn to their social networks for news, not the local newspaper:

I don’t follow the LSJNews feed (nearly 17000 tweets in just over 800 days! way too much information!), and rarely visit the LSJ website (due to the quantity and quality of their advertisements). I instead follow locals…and get Nixle alerts from government agencies for major news in the area. The power of the medium makes this possible; if the message is interesting enough, someone in my social graph will relay it.  ~ cchoffme

I will give credit to the Lansing State Journal for wanting to hear more about this issue. The newspaper’s Twitter feed even retweeted my original blog post and poll. There’s no question the State Journal and other news outlets are experiencing growing pains as they fumble around in the social media space. Perhaps they can finally find a niche that allows them to connect with readers again so people will turn there first for news and information that is timely, important, accurate, complete, unbiased and reported fairly. Come to think of it, maybe social media can wait and newspapers should focus on making that happen on their own websites and printed pages first! If you don’t have credibility and the trust of your readers, it doesn’t really matter what medium you use to publish the information, because no one will be paying attention to you.