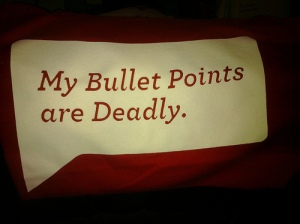 There’s a national contest called PowerPoint Karaoke (sometimes referred to as Battle Decks) and it’s coming to East Lansing on Tuesday, Nov. 17 at 8:30 p.m. The event will be held at 147 (Auditorium) Communication Arts & Sciences Building on the campus of Michigan State University.

The idea behind Battle Decks is that you get up in front of a group to do a PowerPoint presentation that lasts about 5 minutes — with the kicker being that you have no idea what is in the deck you are presenting. Some of the slides may be serious quotes, another could be an Excel spreadsheet graph, some could be silly pictures.

Contestants will be judged by a panel with the winner earning a very cool prize provided by Imation. We also will be filming the presentations and uploading them to YouTube for the national competition, which includes thousands of dollars in prizes and cash for winners.

Come cheer on public relations, broadcast and social media types from mid-Michigan as they battle it out for bragging rights. This event is co-hosted by the Public Relations Student Society of America chapter at MSU.